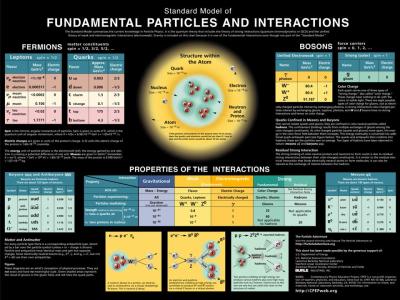 Death of the Higgs.
SADLY:- The HIGGS does not confer mass, says CERN; at least not much mass “approximately a fingernail of mass compared to the whole human body”

March 2013 – In happier times for the Higgs –
The Guardian newspaper today patiently explains that the hugely celebrated Higgs Boson, tentatively formally identified by scientists at the LHC – Large Hadron Collider, at CERN, Geneva – “confers” mass on empty space thus converting Space-Time into the Higgs-Field; illustrating it with “…if space (formerly empty, now the Higgs-Field) were custard, some sub-atomic particles have to wade through the custard which sticks to them, which makes them heavy. Others, such as Photons, pass through it without any stickiness and are not slowed down…”
Are you, gentle reader, any the wiser?
The chart may help to understand the Particle-Zoo that the Higgs belongs to.
I tried to unravel the myths, metaphors and similes a few weeks ago, with my text:
HIGGS BOSON: The Higgs (Prof Higgs’) Boson (photons and other ephemeral tiny parts of the atom) is an alleged relatively large tiny sub-atomic (smaller than an atom but 133 times bigger than a proton) photonic particle that Prof Higgs (an English physicist) mathematically calculates (Prof. Higgs still lives) to be the particle that is missing from the “particle zoo” that constitute The Standard Model (of the atom etc). Most other particles that have been calculated to exist have actually been found at research centres like the Large Hadron Collider or LHC at CERN. (“Large” means big; “Hadrons” are found at the centre or Nucleus of an atom – made of Quarks (the tiniest of all particles. Rhymes with ‘corks’) and include many types including pions and kaons; “Collider” means the Hadrons are bashed together at CERN at high speed). The very expensive collisions smash the Hadrons into bits. Scientists hope that one of the bits will be the elusive Higgs Boson.
I have just alienated all scientists and given Richard Dawkins terminal apoplexy by using English, magic, God and inappropriate Caps for emphasis, instead of maths-physics-obscure-language, which is vitally necessary to secure their budgets.
Scientists explain that the Higgs Boson confers mass on matter, on the other sub-atomic particles such as photons and electrons that are otherwise weightless. It weighs – or compresses light-energy of about 125 Giga (a billion) electron volts. (WikiP – data hints at a possibility the Higgs may exist with a mass around 125 GeV/c2 (about 133 proton masses, on the order of 10−25 kg).)
The evidence that the Higgs is indeed missing, or not yet found, is in the calculation that in the centre of atoms, where the Quarks are, about 80% of mass is missing and that at the other end of the scale, galaxies are “missing” up to 90% of the mass needed to glue them together. The Higgs would provide the glue in the form of more gravity. Gravity is also a scientific mystery.
Now you might have a little more understanding. If not – do not despair – as to really understand what Professor Higgs and his fellow particle-physicists are presenting requires being one of about one hundred mathematical-physicists in the world who can confidently perform, follow and correct the mathematics.

Even the genius Albert Einstein needed expert help with the maths for his celebrated theories. So don’t feel badly about yourself.
Real science relies on repeatable, predicted experimental results. CERN needs to check their recent findings and the wider scientific community at other particle accelerators need to reproduce the results. This may give me time to build up my understanding of the Higgs – and find words to describe it.  So far, my own amateur ideas (EIG, Expansion is Gravity) of how the universe works and what that “custard” might be (i.e. my Aether-Matrix); still accord with currently accepted knowledge.
www.noelhodson.com/index_files/Life-Universe-Everything-8Mar2011.pdf

WILL THE HIGGS FIELD SUFFER HEAT-DEATH?